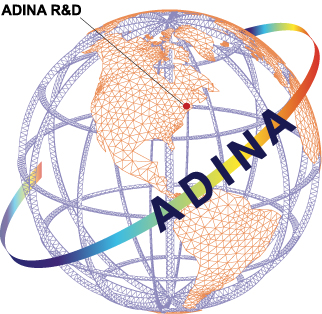 The ADINA System is used widely in many fields of application, including the automotive, aerospace, manufacturing, nuclear, and biomedical industries, civil engineering applications, and research.

Some of the nonlinear structural analysis capabilities of ADINA are offered as Solution 601/701 of NX Nastran, by Siemens.

Among the many reasons why the ADINA System is used, three key aspects stand out strongly - Uniqueness, Reliability, and Efficiency.

The uniqueness of the ADINA System is best described in the article of Design News about the design of ACE Controls' new Magnum shock absorber. We quote (emphasis ours):

To locate the best program, Ferkany (of ACE Controls) contacted 11 different FEA software manufacturers and gave them each a test: If 800 pounds-force hit the shock absorber at four feet per second, what would the deceleration be? From empirical data, Ferkany already knew the answer. What surprised him, though, was that most existing FEA manufacturers couldn't - or didn't want to - solve it.

One did, however. Adina R&D Inc. replied with an answer approximately two-and-a-half months after Ferkany's initial query. "They gave me back the exact curve that we had already gotten from our lab," Ferkany recalls. "So I told them we wanted their software."

ADINA is often selected for applications where reliability is of critical importance. The failure of the design may result in the loss of lives.

A case in point is the use of ADINA for the seismic analysis for retroactive strengthening of six toll bridges in California, including the famous San Francisco Bay Bridge. After the 1989 earthquake in the Bay Area, the California Governor's office commissioned that these bridges are to be analysed with state-of-the-art tools and ADINA was selected. To view the page for this application, click here.

While car crash analyses have been carried out with success, a crush analysis is much more difficult to achieve. The reasons for this greater difficulty lie in that crush analysis requires a slow-speed, almost static solution. To carry out such a solution, the program must have great robustness and efficiency in the solution algorithm.

Effective solutions of crush analyses have been obtained using ADINA with the very efficient static/implicit dynamic capabilities. The crush analysis of the Ford Windstar is presented in this section.


*This finite element model was created through importing a Parasolid CAD model from Grabcad.com into ADINA-M and meshing in ADINA.